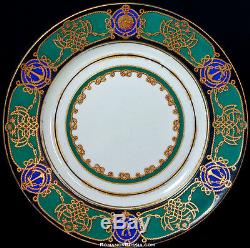 GUARANTEED TO BE GENUINE ANTIQUE AND OF THE PERIOD STATED. An Ornate 19th Century Antique Russian Imperial Porcelain Plate Emperor Alexander II dinner plate from the Formal Service of the Tsar's private yacht DERZHAVA (The Imperial Orb). According to the archives, the service was recorded as "the formal service for the Imperial family" see.

The Russian Imperial Yachts Late XVII - Early XX Century. This is the most decorated yacht service of the Russian Tsars. The service was intended for 30 people. It was made at the Imperial Porcelain Factory between 1871 and 1874 with some later editions produced in 1878.

Archival records indicate that there were 816 porcelain pieces from The Formal Service on board the yacht in 1890. Condition: worn gilding of two lines that circle the center; intact gilding of the center and border; light rubbing to black ground of the border; no chips, no cracks, no restoration. An attractive display plate from one of the rarest Russian Imperial yachts.

The border is decorated with a jeweled gold Russian Imperial Orb on a Royal blue ground. The center is painted with a circle of rope knots. Factory mark in the form of Czar Alexander II cipher. The item "Yacht Derzhava Antique Russian Imperial Porcelain Plate" is in sale since Wednesday, October 8, 2014.

This item is in the category "Antiques\Decorative Arts\Ceramics & Porcelain\Plates & Chargers".com" and is located in Chicago, Illinois. This item can be shipped worldwide.