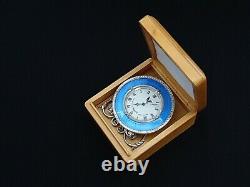 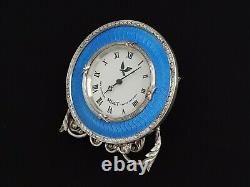 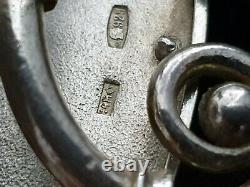 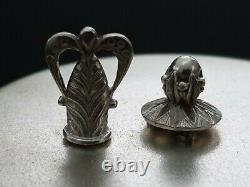 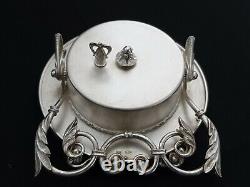 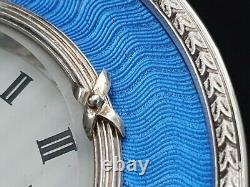 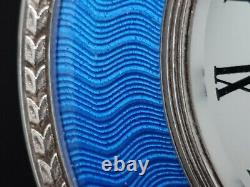 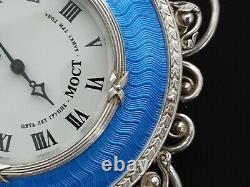 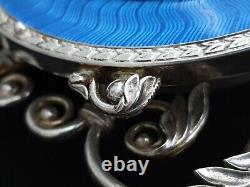 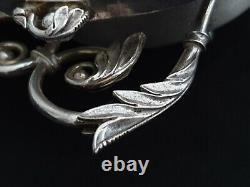 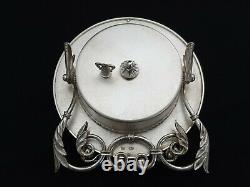 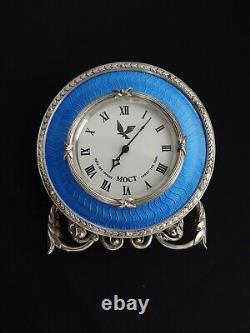 For your consideration is a rare and important silver mechanical clock that was a personal "thank you" gift of the Russian oligarch and media tycoon Vladimir Gusinsky (one of the richest people in Russia in the 1990s) to a journalist who covered his activity in the 1990s. Less than 50 of these timepieces were made on occasion of the third anniversary of Mr. Gusinsky's Most Bank Mr. Gusinsky claimed that Most Bank was the first to distribute credit cards in Russia, and the fifth anniversary of his business, the Most group.

The clock was never used, wound up once or twice. On the clock-face there is an image of an eagle - the symbol of the bank, and the words in Russian: "MOST, the fifth anniversary of the group, the third anniversary of the bank". On the back of the clock there are two stamps: one has the image of a girl in a kokoshnik (woman's headdress in old Russia), this image has been used on silver in Russia starting from 1994, and numbers 925; another stamp looks like this - : 4 M?

The box measures 5.5'x4.5'x 3. Beautiful rare timepiece, which is unlikely to be found anywhere! In 1997 Gusinsky left his post at Most Bank to concentrate on his media interests, run by the private holding company Media-Most.

Russia's president, Vladimir Putin, who came to power in 2000 vowed to strip the "oligarchs"-Russia's richest businessmen-of their privileged access to political power. Within weeks of Putin's inauguration, Mr. Gusinsky had been jailed on embezzlement charges. After a bitter court battle, he was forced to relinquish control of his media holdings, and he left the country for exile in the Spanish resort of Sotogrande, where in the 1990s Mr. Gusinsky bought a 5,770 sq ft luxurious villa on a 38,000 sq ft property.

He often travels by boat for the 13-mile trip from Sotogrande to Gibraltar where his Gulfstream jet is kept. Gusinsky moved to Israel, where he again accumulated significant media holdings.

Gusinsky has been active in religious and humanitarian causes, including the Russian Jewish Congress and the World Jewish Congress. This item is in the category "Antiques\Silver\Non-U. The seller is "galleryoff5th" and is located in this country: US. This item can be shipped worldwide.