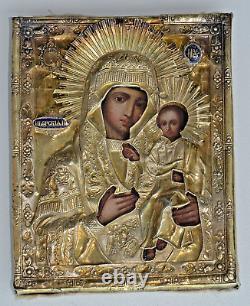 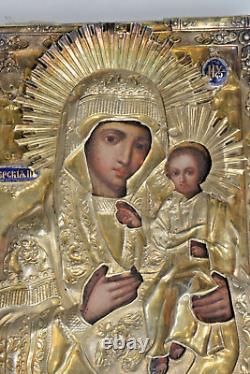 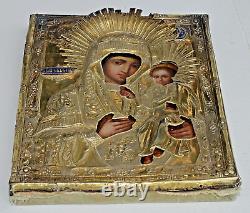 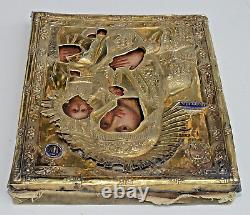 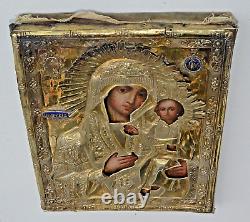 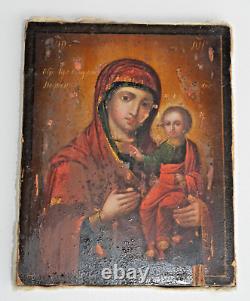 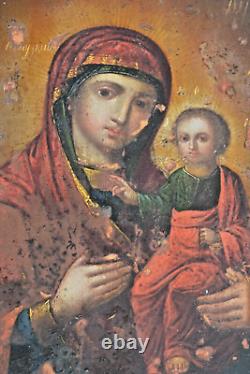 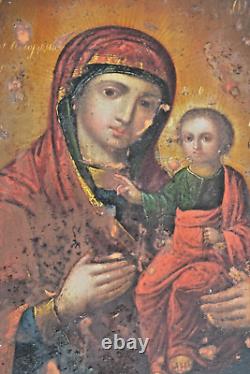 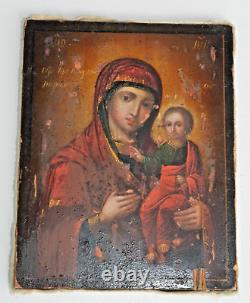 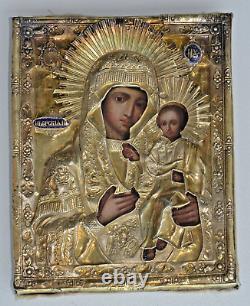 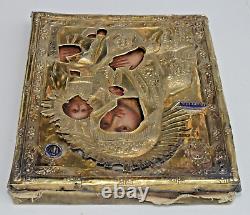 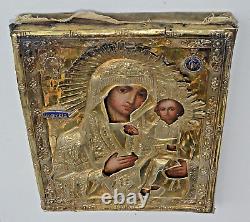 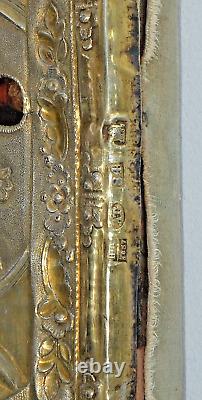 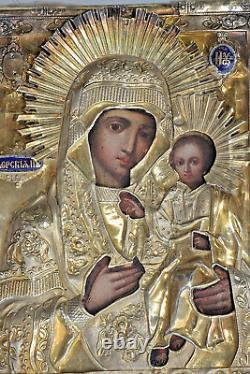 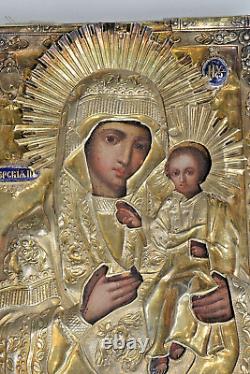 153 grams // 99 dwt. A powerful and inviting meditation on the inner life of love and unity that is the heart of the religion, Holiness ICON St. Iverskaya The Mother of God is an Easter Orthodox Icon.

THE HOLY MOTHER of GOD of IVERSKAYA THEOTOKOS is an EASTERH ORTHODOX ICON. A Prayer Icon and Clarified by Church and Blessed (consecrated) by Christian Church. GILDED 84 SILVER RIZA (Oklad), HARDWOODEN ICON. If you want to protect your soul from the evil eye. Or help your guardian angel, this icon of will protect you and will strengthen spirit of your Angel!!

A powerful and inviting meditation on the inner life of love and unity that is the heart of the Trinity. Oil with oil and gilded painting.

Makers mark: 84" silver made from the solid silver metal 84". We Guarantee everything is silver 84 (875/1000). Good condition, regarding its age. The Oklad (Riza) is damaged, see photos Hallmarked along the on the bottom of the end of the icon are marker stamp 84 silver , there is light wear, good so see our many photos to get the best idea of condition. The quality of this Icon is very fine and detailed with beautiful facial painting.

Original patina of the metal, creates magnificent beauty of the product. The crown is essentially perfect. The best indication of condition is to study the photographs carefully, photos are part of the description. We Guarantee everything, is silver 84 (875/1000), 100% Authenticity. Is truly a fabulous piece of Russian exhibit in Silver Gilt and Egg tempera painting. The Iberian Icon of the Mother of God Iverskaja, located on Athos, became famous for many miracles. The rumor about the miraculous image spread throughout Russia through pilgrims. His Holiness Patriarch Nikon (then archimandrite of Novospassky) turned to Archimandrite Pachomius of the Iberian Athos Monastery (who had come to Moscow to receive alms for the Athos monasteries) with a request to send a copy of the miraculous Iberian Icon of the Most Holy Theotokos. The Athos monk Iamblichus wrote a copy from the Iberian icon, and a year later the icon, accompanied by Athos monks, arrived in Moscow. On October 13, 1648, she was solemnly welcomed by the inhabitants of the capital. The great shrine of the Russian Orthodox Church, the Moscow Iberian Icon, has been glorified by the Lord with many miracles. The Iberian icon (which is now kept on Mount Athos) in the 9th century was kept by a pious widow who lived near the city of Nicaea. Under the emperor Theophilus (829-842), iconoclasts who destroyed the holy icons came to the house of this Christian woman, and one soldier struck the image of the Mother of God with a spear. Immediately, blood flowed from the affected area.

When they left, the woman, together with her son (later a monk of Athos), lowered it into the sea to preserve the holy icon. The icon, standing on the water, sailed to Athos. The monks of Athos, for several days seeing a pillar of fire rising to heaven in the sea, came to the shore and found a holy image standing on the water. After a prayer service for the conferral of the shrine that appeared to the monastery, the pious monk of the Iberian Monastery, Saint Gabriel Gruzin Comm. 25 July, at the command of the Mother of God, who appeared to him in a dream, walked on the water, accepted the holy icon and placed it in the temple.

However, the next day the icon was found not in the temple, but over the gates of the monastery. This was repeated several times, until the Blessed Virgin revealed to Saint Gabriel Her will in a dream, saying that she did not want to be kept by the monks, but wanted to be their Guardian. After that, the image was placed over the monastery gates, where it remains to this day. Therefore, the holy icon is called Portaitissa, the Goalkeeper. On Tuesday of Bright Week (movable celebration) - the acquisition of the prototype in the sea near Mount Athos; February 12 (February 25) - transfer of the copy of the Iberian Icon to the monastery in Valdai in 1656; October 13 (October 26) - a solemn meeting and transfer in 1648 to Moscow of the copy of the icon sent to Tsar Alexei Mikhailovich from Athos; April 23 (May 6) - the second acquisition of the oldest Moscow image (list) of the icon in 2012, when it was transferred by the Historical Museum of the Russian Orthodox Church (now the list is in the Novodevichy Convent). Of the IVERSKAYA MOTHER OF GOD, by GRIGORY SBITNEV with IMPERIAL WARRANT, MOSCKOW RUSSIAN. 84 SOLID HEAVY STANDARD SILVER RIZA-OKLAD. The IVERSKAYA MOTHER of GOD with a 84 SILVER and CLOISONN ENAMEL OKLAD. The Icon realistically painted in strong bright colours on gilt ground, the Christ Child seated in His mother's left arm with His right hand raised in blessing, His mother's head inclined towards her Son, with her right hand raised pointing towards the Saviour indicating He is the True Path, in a finely decorated chased and engraved silver-gilt oklad with folaite scrolls, applied with shaded cloisonne enamel haloes, within similar shaded enamel borders of pan-Slavic motifs with elaborate cornerpieces incorporating roundels, with a champlevé enamel plaque inscribed in Slavonic On the day of the holy Coronation of Their Imperial Majesties with the Most Heartfelt Sentiment from the Faithful Kiev Nobility 1883. An extremely fine example of realistic icon-painting showing unusual detail in the paintwork, of one of the most popular images of the Mother of God Hodegitria, this being the'Iverskaia' image, originating in Iberia, that is the Caucasus. Enjoyed an unrivalled command of every technique employed Art painting school, as well as with the gold and silverware. This unique fusion of the national creative spirit and contemporary culture helped to create some of the greatest masterpieces of Russian and world jewelry. Russia has long been a leader in production of enamel with orders and medals and other enamel wares.

Has been glorified by many miracles. Accounts of the wonderworking image were spread throughout Russia by pilgrims. His Holiness Patriarch Nikon (then still Abbot of the Novospasky monastery) asked Abbot Pachomius of the Iv?

Ron Monastery on Mt Athos, (who was in Moscow collecting alms for the Athonite monasteries) to supply a copy of the wonderworking Iv? Ron Icon of the Most Holy Theotokos. The Athonite monk Iamblichos painted the copy of the Iv? Ron Icon, and after a year the icon was taken to Moscow, accompanied by monks of Athos. On October 13, 1648 it was solemnly greeted by a multitude of the people.

Ron Icon of the Russian Orthodox Church was also glorified by the Lord with many miracles (February 12). Ron Icon is also commemorated on February 12, March 31, and Bright Tuesday. Read Description Carefully , Pictures are part of Description. This item is in the category "Collectibles\Religion & Spirituality\Christianity\Icons".

The seller is "rima83" and is located in this country: US. This item can be shipped worldwide.