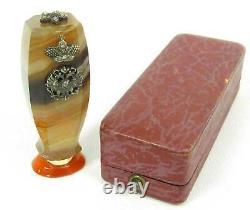 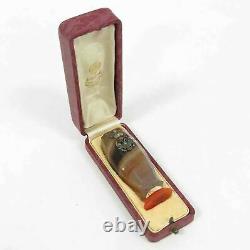 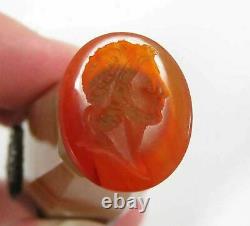 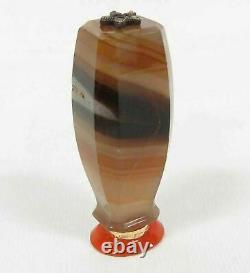 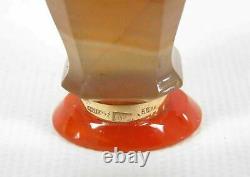 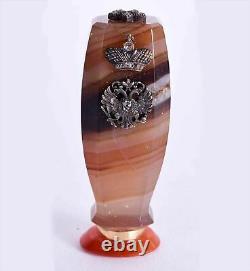 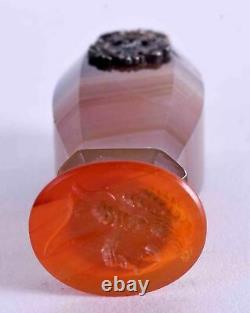 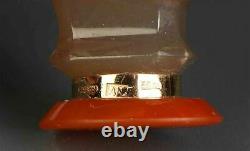 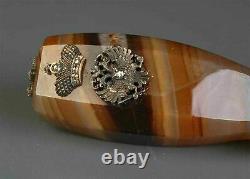 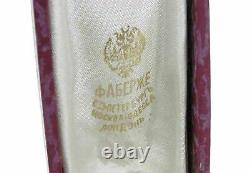 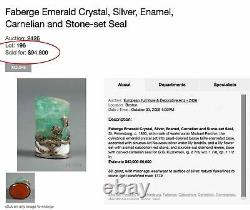 FABERGE - RUSSIAN IMPERIAL GOLD MOUNTED AGATE SEAL, BOXED. Carved Agate Seal Decorated with Silver and Gold Ornaments Set with Rose-Cut Diamonds. Stamped with Russian Gold and Silver Marks. The item is very nice made and has a maker marks: 84 for silver, 56 for gold and FABERGE stamp. Also where is initial'AN' for Faberge workmaster Anders Juhaninpoika Nevalainen - please read information from Wikipedia below. The item is in original box which has a Faberge House stamp. SIZE : 85 mm (3.35 inches). It is a great INVESTMENT. Recently the silver not gold!! - please see the screenshots. Y ou can give us a reasonable OFFER. PAY in PARTS : You can pay for any item during 2 - 3 months.

Just make a deposit 10% and the item will wait for you. WIKIPEDIA : Peter Carl Faberge, also known as Karl Gustavovich Faberge was a Russian jeweller best known for the famous Faberge eggs made in the style of genuine Easter eggs, but using precious metals and gemstones rather than more mundane materials. He's the founder of the famous jewelry legacy House of Faberge.

The House of Faberge is a jewelry firm founded in 1842 in St. Petersburg, Imperial Russia, by Gustav Faberge, using the accented name Faberge, Gustav's sons Peter Carl Faberge and Agathon Faberge, and grandsons followed him in running the business until it was nationalised by the Bolsheviks in 1918.

WORKMASTER : Anders Juhaninpoika Nevalainen was a Russian gold- and silversmith, Faberge workmaster of Finnish origin. Anders Nevalainen was an apprentice in Finland and in St. Petersburg in 1874, a goldworker in 1875 (and registered as an employee of Faberge), and a master goldsmith in 1885.

As master first working in the jewelry atelier of August Holmstrom, he soon became head of workshop under exclusive contract with Faberge. His workshop made silver-mounted frames in birchwood, palisander or lacquer, silver- and gold cigarette-cases, enameled silver-gilt cases with leather sleeves, several small silver-gilt objects. N, mostly used with K. Faberge mark without the double-headed eagle Imperial Warrant. Anders Nevalainen died in Terijoki in 1933. The item "RARE RUSSIAN IMPERIAL GOLD MOUNTED AGATE SEAL, Anders Nevalainen" is in sale since Saturday, May 11, 2019. This item is in the category "Antiques\Silver\Non-U. The seller is "ww2_army" and is located in Blaine, Washington.