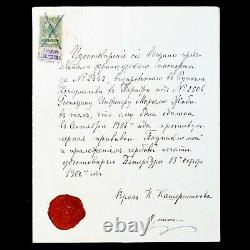 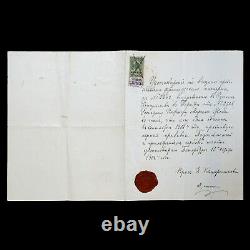 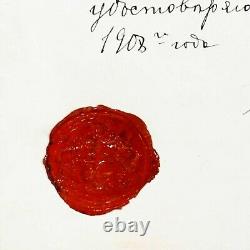 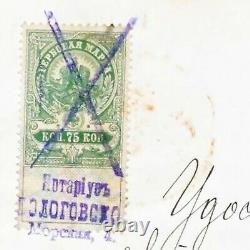 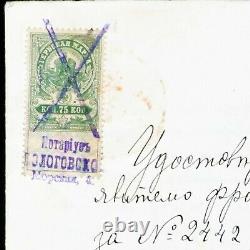 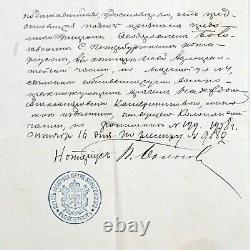 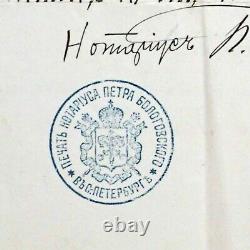 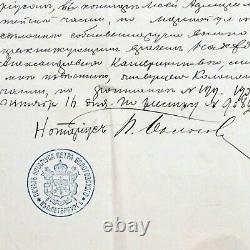 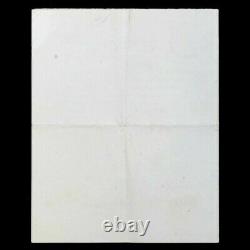 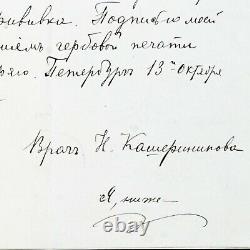 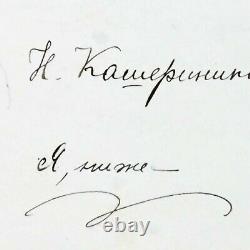 For your consideration is a rare and important 1908 Imperial Russian signed and sealed Emperor / Tsar Nicholas II of Russia military manuscript document / order / commission / appointment / decree / edict / letter, with original imperial Russian wax stamp. This manuscript letter document is from the Romanov days of Czar Nicholas II, Emperor of Russia. Nicholas II or Nikolai II Alexandrovich Romanov[d] 18 May O. 6 May 1868 17 July 1918, known in the Russian Orthodox Church as Saint Nicholas the Passion-Bearer, [e] was the last Emperor of All Russia, ruling from 1 November 1894 until his forced abdication on 15 March 1917. During his reign, the Russian Empire implemented reforms such as the first civil liberties in Russian history, literacy programs, state representation, modern infrastructures, the beginning of major Industrialization and military reforms after the defeat in the Russo-Japanese war (19041905).

He was reviled by Soviet historians promoted by state propaganda as a weak and incompetent leader whose decisions led to military defeats and the deaths of millions of his subjects. As Emperor, Nicholas gave support to the economic and political reforms promoted by top aides Sergei Witte and Pyotr Stolypin, but strong aristocratic opposition prevented these from becoming fully effective. He supported modernization based on foreign loans and close ties with France, but resisted giving the new parliament (the Duma) major roles. He was criticised for his perceived fault in the Khodynka Tragedy, anti-semitic pogroms, Bloody Sunday, the violent suppression of the 1905 Russian Revolution, the repression of political opponents, and his supposed responsibility for defeat in the Russo-Japanese War, which saw the Russian Baltic Fleet annihilated at the Battle of Tsushima, together with the loss of Russian influence over Manchuria and Korea, and the Japanese annexation of the south of Sakhalin Island.

Nicholas signed the Anglo-Russian Entente of 1907, which was designed to counter Germany's attempts to gain influence in the Middle East; it ended the Great Game of confrontation between Russia and the British Empire. He supported Serbia and approved the mobilization of the Russian Army on 30 July 1914. In response, Germany declared war on Russia on 1 August 1914 and its ally France on 3 August 1914, starting the Great War, later known as the First World War. The aristocracy was alarmed at the powerful influence of the despised peasant priest Grigori Rasputin over the czar. The severe military losses led to a collapse of morale at the front and at home, leading to the fall of the House of Romanov in the February Revolution of 1917.

Nicholas abdicated on behalf of himself and his son. With his family, he was imprisoned by the revolutionary government, exiled to Siberia, and executed the following year in July 1918. In 1981, Nicholas, his wife, and their children were recognized as martyrs by the Russian Orthodox Church Outside Russia, based in New York City.

[7] Their gravesite was discovered in 1979, but this was not acknowledged until 1989. After the fall of Communism, the remains of the imperial family were exhumed, identified by DNA analysis, and re-interred with an elaborate state and church ceremony in St.

Petersburg on 17 July 1998, exactly 80 years after their murder. They were canonized in 2000 by the Russian Orthodox Church as passion bearers. [8] The remains of two more Romanov children, believed to be Maria and Tsesarevich Alexei, were found in 2007 at a second, nearby gravesite, that was also unmarked. They were also identified by DNA analysis. These remains are still waiting to be buried alongside the rest of the Family.

Nicholas was born in the Alexander Palace in Saint Petersburg, Russian Empire, the eldest child of Emperor Alexander III and Empress Maria Feodorovna of Russia (née Princess Dagmar of Denmark). He had five younger siblings: Alexander (18691870), George (18711899), Xenia (18751960), Michael (18781918) and Olga (18821960). Nicholas often referred to his father nostalgically in letters after Alexander's death in 1894. He was also very close to his mother, as revealed in their published letters to each other. His paternal grandparents were Emperor Alexander II and Empress Maria Alexandrovna (née Princess Marie of Hesse and by Rhine).

His maternal grandparents were King Christian IX and Queen Louise of Denmark. Nicholas was of primarily German and Danish descent, his last ethnically Russian ancestor being Grand Duchess Anna Petrovna of Russia (17081728), daughter of Peter the Great.

Nicholas was related to several monarchs in Europe. His mother's siblings included Kings Frederick VIII of Denmark and George I of Greece, as well as the United Kingdom's Queen Alexandra (consort of King Edward VII). Nicholas, his wife Alexandra, and German Emperor Wilhelm II were all first cousins of King George V of the United Kingdom.

Nicholas was also a first cousin of both King Haakon VII and Queen Maud of Norway, as well as King Christian X of Denmark and King Constantine I of Greece. Nicholas and Wilhelm II were in turn second cousins-once-removed, as each descended from King Frederick William III of Prussia, as well as third cousins, as they were both great-great-grandsons of Tsar Paul I of Russia. In addition to being second cousins through descent from Louis II, Grand Duke of Hesse and his wife Princess Wilhelmine of Baden, Nicholas and Alexandra were also third cousins-once-removed, as they were both descendants of King Frederick William II of Prussia.

Tsar Nicholas II was the first cousin-once-removed of Grand Duke Nicholas Nikolaevich. To distinguish between them the Grand Duke was often known within the imperial family as "Nikolasha" and "Nicholas the Tall", while the Tsar was "Nicholas the Short". In his childhood, Nicholas, his parents and siblings made annual visits to the Danish royal palaces of Fredensborg and Bernstorff to visit his grandparents, the king and queen. The visits also served as family reunions, as his mother's siblings would also come from the United Kingdom, Germany and Greece with their respective families.

It was there in 1883, that he had a flirtation with one of his British first cousins, Princess Victoria. In 1873, Nicholas also accompanied his parents and younger brother, two-year-old George, on a two-month, semi-official visit to the United Kingdom. In London, Nicholas and his family stayed at Marlborough House, as guests of his "Uncle Bertie" and "Aunt Alix", the Prince and Princess of Wales, where he was spoiled by his uncle. On 1 March 1881, following the assassination of his grandfather, Tsar Alexander II, Nicholas became heir apparent upon his father's accession as Alexander III. Nicholas and his other family members bore witness to Alexander II's death, having been present at the Winter Palace in Saint Petersburg, where he was brought after the attack.

For security reasons, the new Tsar and his family relocated their primary residence to the Gatchina Palace outside the city, only entering the capital for various ceremonial functions. On such occasions, Alexander III and his family occupied the nearby Anichkov Palace. In 1884, Nicholas's coming-of-age ceremony was held at the Winter Palace, where he pledged his loyalty to his father. Later that year, Nicholas's uncle, Grand Duke Sergei Alexandrovich, married Princess Elizabeth, daughter of Louis IV, Grand Duke of Hesse and his late wife Princess Alice of the United Kingdom (who had died in 1878), and a granddaughter of Queen Victoria. At the wedding in St. Petersburg, the sixteen-year-old Tsesarevich met with and admired the bride's youngest surviving sister, twelve-year-old Princess Alix. Those feelings of admiration blossomed into love following her visit to St. Petersburg five years later in 1889. Alix had feelings for him in turn. As a devout Lutheran, she was initially reluctant to convert to Russian Orthodoxy in order to marry Nicholas, but later relented. In 1890 Nicholas, his younger brother George, and their cousin Prince George of Greece, set out on a world tour, although Grand Duke George fell ill and was sent home partway through the trip. Nicholas visited Egypt, India, Singapore, and Bangkok, receiving honors as a distinguished guest in each country.

In April 1891, in the city of tsu, Japan, Nicholas was attacked by a deranged Japanese police officer. The incident cut his trip short. Some historians have speculated on how the incident may have later influenced his opinion of Japan and the Japanese. [16] Returning overland to St. Petersburg, he was present at the ceremonies in Vladivostok commemorating the beginning of work on the Trans-Siberian Railway.

In 1893, Nicholas traveled to London on behalf of his parents to be present at the wedding of his cousin the Duke of York to Princess Mary of Teck. Queen Victoria was struck by the physical resemblance between the two cousins, and their appearances confused some at the wedding. During this time, Nicholas had an affair with St. Though Nicholas was heir-apparent to the throne, his father failed to prepare him for his future role as Tsar. He attended meetings of the State Council; however, as his father was only in his forties, it was expected that it would be many years before Nicholas succeeded to the throne. Sergei Witte, Russia's finance minister, saw things differently and suggested to the Tsar that Nicholas be appointed to the Siberian Railway Committee. Alexander argued that Nicholas was not mature enough to take on serious responsibilities, to which Witte replied that if Nicholas was not introduced to state affairs, he would never be ready to understand them. Alexander's assumptions that he would live a long life and had years to prepare Nicholas for becoming Tsar proved wrong, as by 1894, Alexander's health was failing.

The item "RARE 1908 Imperial Russian Signed Sealed Document Nicholas II Wax Stamp Nobility" is in sale since Wednesday, August 12, 2020. This item is in the category "Collectibles\Historical Memorabilia\Royalty Collectibles". The seller is "galleryoff5th" and is located in New York, New York. This item can be shipped worldwide.