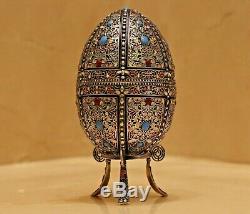 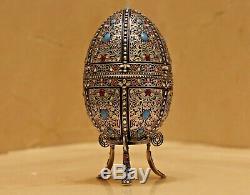 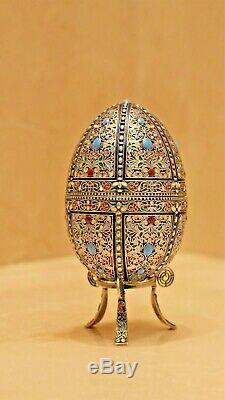 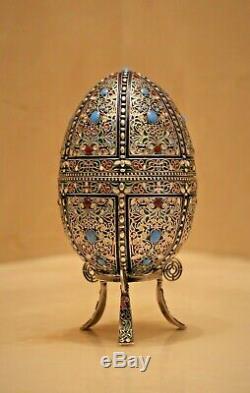 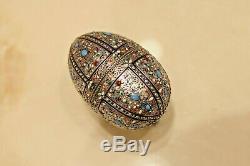 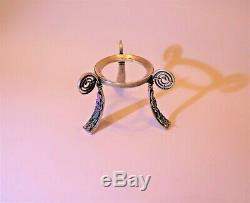 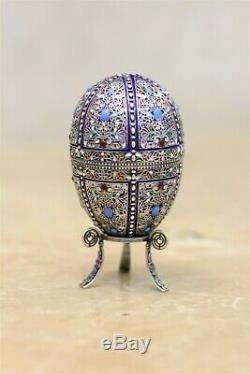 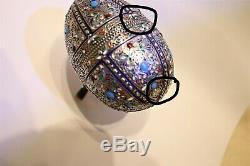 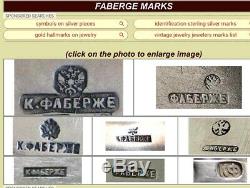 ANTIQUE FABERGE RUSSIAN IMPERIAL SILVER 84 CLOISONNE ENAMEL EASTER EGG MOSCOW. The silversmith here is to the same superb standard as the enamel work just as one would expect from. The piece is beautifully finished and smooth, it feels lovely in the hand.

The two halves of the egg fit perfectly, the precision of the friction fit so good that no hinge or clasp is required. The chasing detailed but delicate and soft to the touch. We try to describe all items accurately and give good visual support through photographs and text. Please check all pictures; they are a major part of the description and best indication of condition. It has a 4 marking identification from left to right.

1 that indicate for Karl Faberge. 2 Some silver objects made by the workmasters Antti Nevalainen and Julius Rappoport have Fabergés name with the initial K. Its not clear due to the age of the egg and the open and close position.

To clarify the picture turn it anticlockwise to the left you will see the wings. The Imperial Warrant of the double-headed eagle appears, as a rule, on objects made in Fabergés Moscow branch, together with K. Some objects have been found with just the initials KF in Cyrillic. As thousands of new diestamps had to be created, the kokoshnik did not come into full use until early 1899.

Until 1908, the mark consisted of a left facing woman's head in profile within an oval cartouche, she is wearing the peasant headdress traditionally referred to as a kokoshnik. To her left is the standard number and to her right are the assayer's initials which also indicate the assay office. The delineation within the oval is rendered in intaglio. From 1908, her profile is facing right with standard number to her right, to her left is a small Greek letter that indicates the city or region of assay.

The delineation within the oval is rendered in relief. Width in middle 6 cm. It have a small dent in middle and the base please look at picture number 11. The item "FABREGE ANTIQUE RUSSIAN IMPERIAL SILVER 84 CLOISONNE ENAMEL EASTER EGG" is in sale since Friday, August 21, 2020. This item is in the category "Antiques\Silver\Non-U. The seller is "rare-antique-shop" and is located in amman. This item can be shipped worldwide.