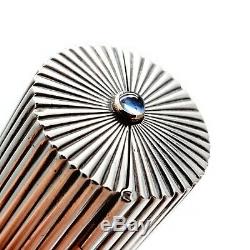 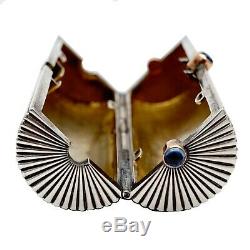 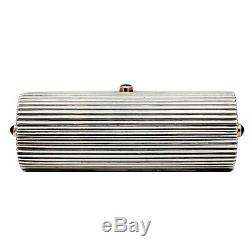 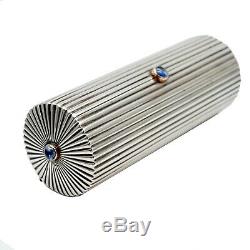 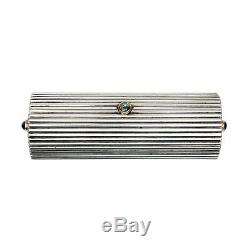 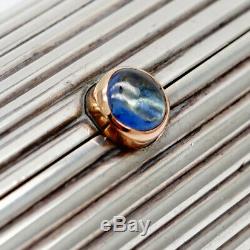 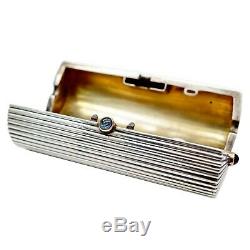 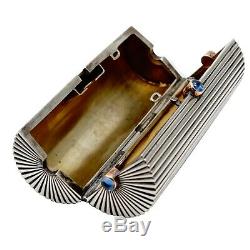 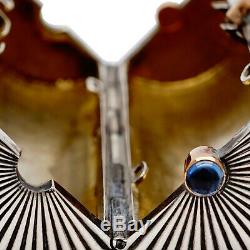 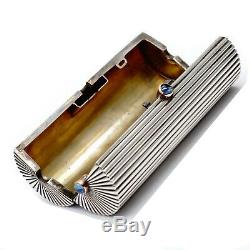 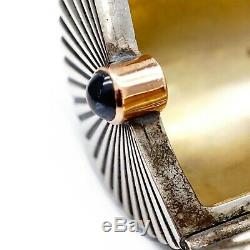 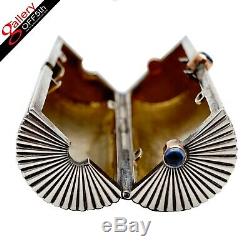 For your consideration is an exceedingly rare, round / circular-shaped, triple sapphire cabochon and sterling 84 silver 88 cigarette case by Faberge, apparently unmarked, St. Perfectly round section, with rounded corners, the hinge cover hand-chased with a reed motif emanating from a cabochon sapphire thumb-piece, with integral gold wash Vesta compartment, the entire body with elongated reeds, with terminals featuring an additional two cabochon sapphires set in 14K gold 56. A Fabergé workmaster is a craftsman who owned his own workshop and produced jewelry, silver or objets d'art for the House of Fabergé. When Carl Fabergé took over the running of the business in 1882, its output increased so rapidly that the two Fabergé brothers could not manage all the workshops themselves.

They therefore decided to establish independent workshops. The owners of these were committed to only work for the House of Fabergé that would supply the sketches and models of the objects to be made. Nothing would be accepted by the House unless it had been approved by either Carl or his appointed deputy. The House of Fabergé also employed its own designers.

However we also know from the Memoirs of François Birbaum written in 1919 (Birbaum was Head Designer of the House of Fabergé from 1896 to 1917) that Carl also designed himself. The workmasters presided over teams of craftsmen and were responsible for executing pieces conceived by the company's designers. The House of Fabergé was staffed with some of the finest goldsmiths and jewelers available.

It is often said that Fabergé did not make anything produced by the House of Fabergé. It is true that nothing has survived that can be said to have been the work of Carl Fabergé. His father, Gustav Fabergé and the founder of the House of Fabergé, ensured that his eldest son received the best possible training to take over the business. After Carls education in St.

Petersburg, this was followed by a course at the Arts and Crafts School in Dresden, the city to which his parents had retired. He then embarked on an eight-year Grand Tour of Europe where he received tuition from respected goldsmiths in Germany, France and England. The apprenticeship with these goldsmiths would have resulted in Carl working at the bench and producing objects.

Petersburg during 1872 his fathers trusted Work-master Hiskias Pendin acted as his mentor and tutor. This would also have involved Carl working at the bench and producing objects. When he was awarded the title Master Goldsmith in 1882, his reputation was then so high that the usual three-day examination was waived;this would not have happened if he had never made anything. The business was divided into several workshops, each with its own specialty. In addition to the fabulous Easter eggs, the workshop also produced table silver, jewelry, European-style trinkets, and Russian-style carvings.

The two master jewelers most responsible for making the Fabergé eggs were Michael Perchin and Finnish-born Henrik Wigström. Born in 1860, Perchin became the leading workmaster in the House of Fabergé in 1886 and supervised production of the eggs until 1903.

Those eggs he was responsible for have his MP (MP- Michael Perchin) markings. All signed eggs made after 1903 bear Henrik Wigstrom's HW mark. Of course, not all eggs were stamped, so other goldsmiths may have supervised production of some of the eggs. Altogether there have been more than 40 workmasters. The item "FABERGE Rare Antique Imperial Russian Silver Cigarette Case Gold Sapphire Vesta" is in sale since Monday, April 1, 2019. This item is in the category "Collectibles\Decorative Collectibles\Decorative Collectible Brands\Faberge". The seller is "galleryoff5th" and is located in New York, New York. This item can be shipped worldwide.