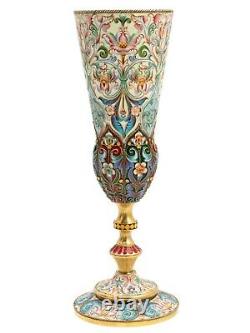 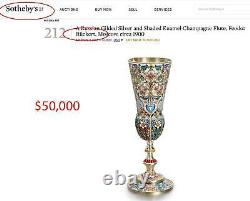 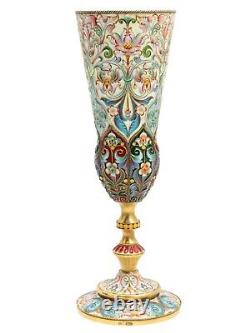 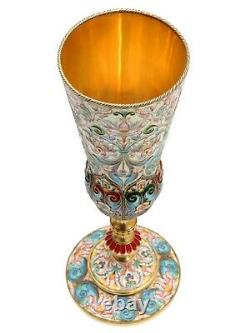 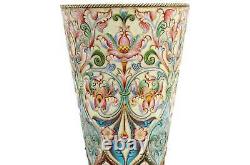 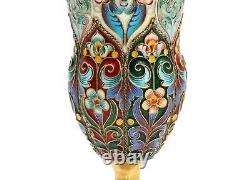 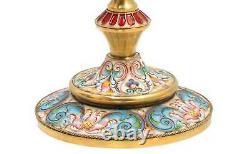 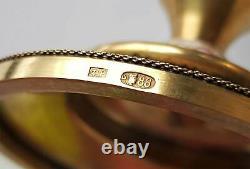 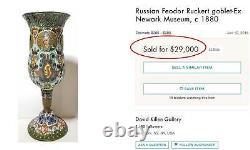 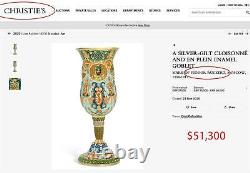 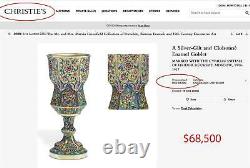 The item is very nice made and has a maker marks: Silver marked with Kokoshnik 88 standard and workmaster's mark F. In Cyrillic for Fedor Ruckert, Russian silversmith, FABERGE workmaster.

Just make a deposit 10% and the item will wait for you. WORKMASTER : One of the greatest names in enamelled silver is that of Feodor Ruckert, whose silver gilt, shaded and matte black enamel punchbowl and ladle of about 1910 represent the imaginative and virtuosic aspects of his work (see cover). Alive with vivid depictions of bears, convivial warriors, maidens, and hoary sages whose enamelled features are further enlivened by the three-dimensional effects of repousse surfaces, the punchbowl embodies the haunting nostalgia for a Russian Neverland that was so much a part of late nineteenth-century aristocratic culture. WIKIPEDIA : Peter Carl Faberge, also known as Karl Gustavovich Faberge was a Russian jeweller best known for the famous Faberge eggs made in the style of genuine Easter eggs, but using precious metals and gemstones rather than more mundane materials. He's the founder of the famous jewelry legacy House of Faberge.

The House of Faberge is a jewelry firm founded in 1842 in St. Petersburg, Imperial Russia, by Gustav Faberge, using the accented name Faberge, Gustav's sons Peter Carl Faberge and Agathon Faberge, and grandsons followed him in running the business until it was nationalised by the Bolsheviks in 1918. The item "EXTREMELY RARE RUSSIAN IMPERIAL ENAMEL GOBLET, FEODOR RUCKERT" is in sale since Tuesday, February 23, 2021. This item is in the category "Antiques\Silver\Non-U.