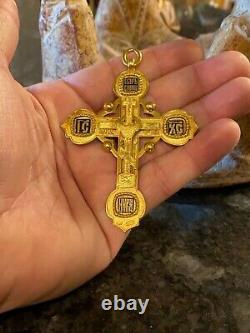 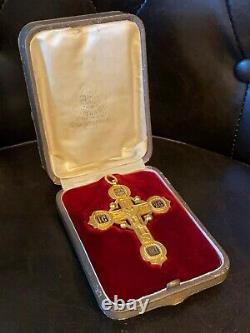 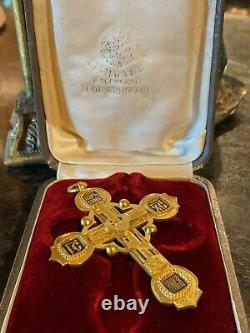 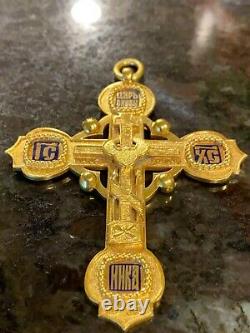 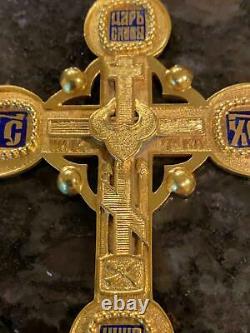 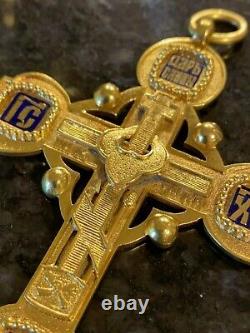 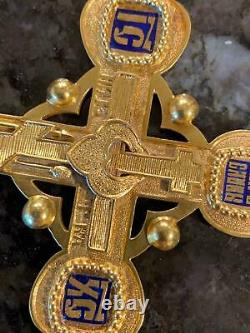 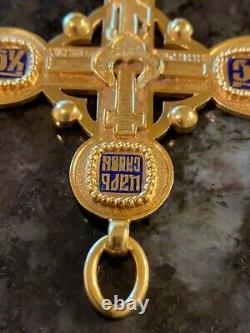 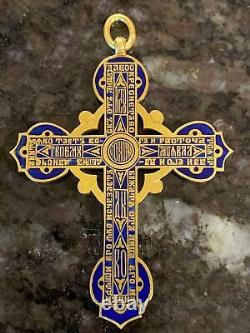 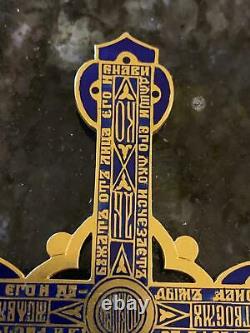 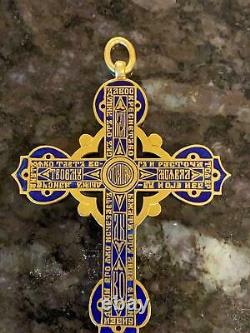 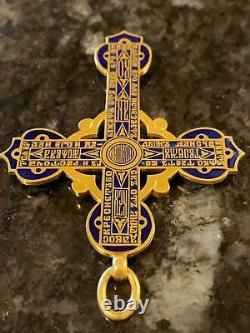 ANTIQUE IMPERIAL RUSSIAN ORTHODOX BISHOP CROSS TSATA CRESCENT PECTORAL 56 GOLD. This beautiful cross is thick, heavy(37.3 grams) and was custom made for someone of importance.

If you would like more pictures or have any questions please feel free to ask. Cross is stamped with 56 zolotniks. With assyer's initials'AP' for Alexander Romanov and master's initials'MO' for Mikhail Ovchinnikov. The bail/ring is stamped as well. Made in solid gold with beautiful cloisonne blue enamel on both sides.

Exceptional fine detail, just amazing the amount of skill Mikhail possessed. Weight: 37.3 grams - Size : 2 1/2" wide x 3 1/2" long including 1/4 bail/ring - Approx 4-5mm thick. As can be seen the cross is in fantastic condition considering age , looks to have spent most its life in the case. Includes the original presentation case marked inside of lid: P Ovchinnikov workshop and the Imperial Family Crest , slightly faded.

It is in very good condition with working closure. I guarantee the authenticity of this cross, i. Era, gold(tested), maker, etc.

Born into a family of a serfs, Ovchinnikov grew up in the village of Otradnoe in the province of Moscow. Sent by Prince Dmitry Volkonsky to study in Moscow in 1842, Ovchinnikov's reputation for producing fine, high quality works rapidly grew and in 1851 he opened his own workshop. Here he employed almost a thousand workers, including many apprentices who flocked to Moscow to learn from the master jeweller.

Ovchinnikov precious works were popular among European royalty, and he was comissioned by Tsar Alexander III of Russia and King Victor Emmanuel II of Italy among others. Ovchinnikov died in Moscow in 1888, where his work was continued by his sons. Pavel Ovchinnikov (in Russian:) was one of the most famous Russian silversmiths of his time and an exceptional businessman. He was born in Moscow province in 1830, from a family of modest origins: his father was a serf.

Nevertheless Pavel was sent to study in Moscow by Prince Dimitri Volkonski, where he was apprenticed in a jewellery shop. In 1850 he gained his freedom and three years later he founded his own workshop. In his factory he employed more than a hundred men, and in 1865 he was appointed Court supplier to the future Tzar Alexander III.

His works were exhibited at the Pan-Russian manufacturing exhibition in 1865 where he won the gold medal and at the Exposition Universelle in Paris in 1867. Few years later he was appointed court supplier by the king of Italy Vittorio Emanuele II and the king of Denmark Christian IX.

In 1873 Ovchinnikov opened a branch in St. Petersburg and by 1881 over three hundred people were working for the firm. Understanding the importance of education, he founded a professional school at his factory for training artists and craftsmen in silverware and jewellery.

Pavel died in 1888 and his sons Mikhail, Alexander, Pavel and Nikolai took over the company until 1917, when the firm ceased trading due to the outbreak of the Russian Revolution. Ovchinnikov is particularly famous for his fine enamel works: he developed different processing techniques (cloisonné, champleé and on watermark) giving them prestige and popularity all over Europe. Nowadays his works are represented at the most important international museums and royal collections.

The seller is "herpman1972" and is located in Dana Point, California. This item can be shipped to United States, Canada.