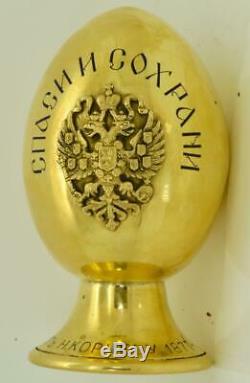 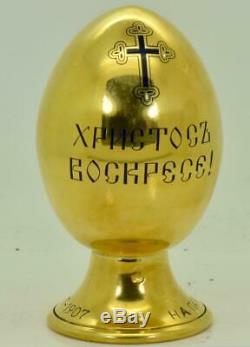 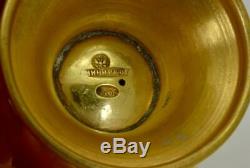 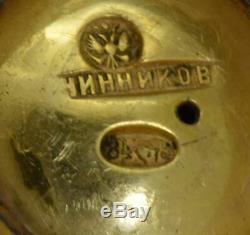 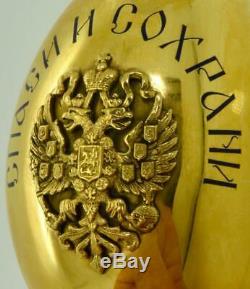 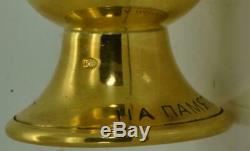 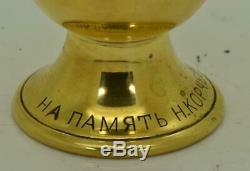 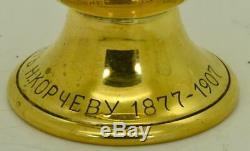 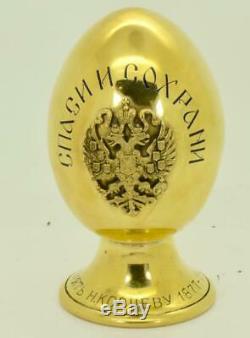 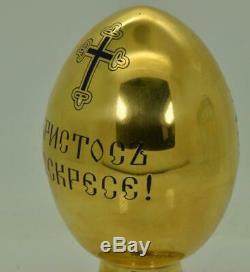 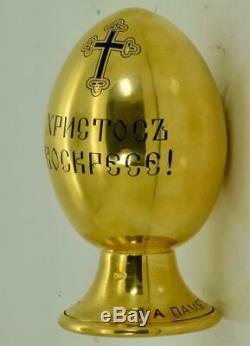 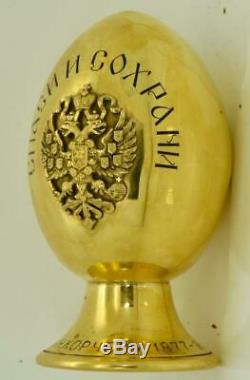 Korchev during the celebration for 20 years from the victory of the Russo-Turkish War c1877. Captain Krochev was the man who wear the battle flag. The egg is hand engraved in Russian in memory to N.

The egg itself is engraved in Russian "Save and Keep" and "Christ is risen". On the front is depicted the Russian coat of arms. Signed with the 84 silver hallmark and with the Ovchinnikov's hallmark.

Pavel Ovchinnikov established himself right in this contingency, producing silversmith and goldsmith artworks with techniques and themes proper to that time taste. He was goldsmith and silversmith, enameller, businessman and industry chief. Pavel, born in the Moscow neighborhood in 1830, was the son of a slave named Akim Ovchinnikov. In his young age he was sent to study in Moscow by the prince Dmitry Volkonsky, where he worked as apprentice in a jewelry workshop, until he started his own atelier.

Even though he was born in slavery, Ovchinnikov became the owner of the biggest Russian society specialized in gold, argent and jewels. His works had a lot of great estimators in the European royal families: he has been appointed as official suppliers of the zar Alexander III, of the king Vittorio Emanuele II of Italy, of the grand duke Mikhail Nikolaevich and the king Christian IX of Denmark.

One of his most important actions was the opening of a education center at its factory in Moscow, where the apprentices could study drawing techniques, modeling and jewelry further the others school subjects. Ovchinnikov was the first russian producer to understand the importance of education, not only for the chiefs of his factories but also for the workers.

Pavel Ovchinnikov made an important contribution to the development of the artistic enamel in Russia. The masters of his firm had a great mastery in different enamel processing techniques: champleé, on watermark and cloisonné (Ovchinnikov was the first to bring back to vogue these techniques in Europe). NOTE:PLEASE OBSERVE CAREFULLY THE PHOTOS! IT IS A SIGNIFICANT PART OF THE DESCRIPTION.

Every potencial defect which is shown in the photos, but not mention in the description, will be considered for described. All the photos shoot by professional Nikon 105 Macro lens under 40x diopter magnification, so you can explore even the smallest detail like under microscope! Get images that make Supersized seem small. Tailor your auctions with Auctiva's.

The item "Antique Imperial Russian gilt silver & enamel Easter egg by Pavel Ovchinnikov" is in sale since Monday, April 27, 2020. This item is in the category "Collectibles\Decorative Collectibles\Eggs".