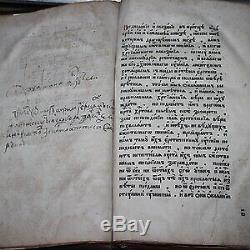 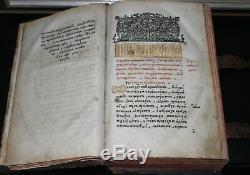 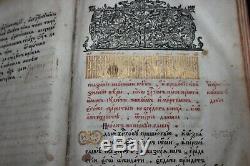 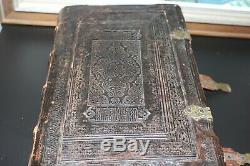 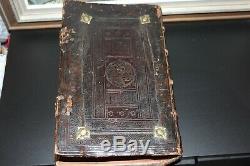 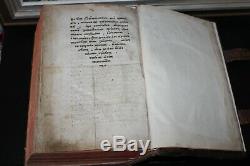 The Book of Saint Kyrill, Archbishop of Jerusalem. Signature and pagination in Slavonic alphabetic numerals: 15+8+561 pages, p. With the final blank leaf but without the front blank and two other blanks. Woodcut headpieces and initials, some printed in red. Soiled and dampstained throughtout, a few tears occasionally affecting text. 17th-century Russian red straight-grained calf, sides with gilt and blind borders, lower cover with brass centre- and cornerpieces, metal shoes and brass catches, edges gauffered and gilt (lacks clasps). Aleksandr Polusharov Litovskii (inscription at foot of fifth leaf) -- Riga Orthodox Seminary (library stamp). FIRST EDITION OF THIS INFLUENTIAL ORTHODOX THEOLOGICAL COMPILATION, printed with the authority of Tsar Mikhail Fedorovich. Some of the texts are strongly anti-Catholic and anti-Protestant. This included the Homily on the anti-Christ by Kyrill, comparing the anti-Christ with the Pope of Rome.

It was widely read in Moscow and orthodox Russia, and reprinted in the 18th century. RARE: WorldCat locates no copies in the UK, and only microfilm in the USA. Pozdeeva 352; Sopikov 569; Zernova 169.

The item "Antique huge illuminated Imperial Russia Bible Book of Saint Kyrill 1644 Moscow" is in sale since Thursday, June 11, 2020. This item is in the category "Books\Antiquarian & Collectible". The seller is "douglasoscarltd" and is located in London. This item can be shipped worldwide.