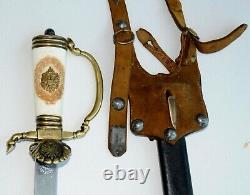 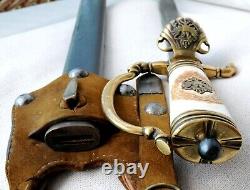 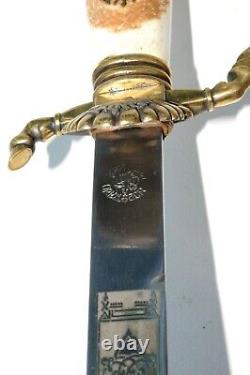 Total length in the scabbard. Length of the blade with handle.

It is was awarded many years ago, but anyway this dagger still in a good condition in corresponds to regarding its age. A great exemplar to add to your collection! The best indication of condition is to study the photographs carefully. HUNTING DAGGER "ZLATOUST" very attractive, even patina on both sides indicates the authenticity of the product. The details of the bas - relief are perfect and extremely crisp; practically all of the original fire gilt finish is present.

A superb example all through. The brass retains beautiful luster throughout, is essentially perfect, possible detection of not significant of microscopic contact marks invisible to the naked eye, no flaking, rubbing or any other noticeable wear. The HUNTING DAGGER retains beautiful luster everywhere. There are a no bumps or scratches especially visible. The suspension device is original and completed. The certainly imperial leather is a little bit worn and tattered. It remains sound overall however, and in our opinion, add tremendous amount of character to the DAGGER. The best indication of condition is to study the photographs carefully, photos are part of the description.

Good condition, but handle is with small minor cracks on it. Hunting dagger times of Nicholas II piece with scabbard and frog all in good condition. Blade measures 19 3/4 inches long and is marked with a Russian Imperial double headed eagle and some. Clamshell guard, and grip also have double headed eagle. Bone handle has crack which runs from top to bottom of handle.

Scabbard appears to be marked "JC" at chape. Very neat frog in good condition. Nicholas II or Nikolai II Alexandrovich Romanov (18 May, 1868 - 17 July 1918). Known in the Russian Orthodox Church as Saint Nicholas the Passion-Bearer. Was the last Emperor of Russia, King of Congress Poland and Grand Duke of Finland, ruling from 1 November 1894 until his abdication on 15 March 1917.

Enjoyed an unrivalled command of every technique employed Art painting school, as well as with the gold and silverware. This unique fusion of the national creative spirit and contemporary culture helped to create some of the greatest masterpieces of Russian and world jewelry. Russia has long been a leader in production of enamel with orders and medals and other enamel wares. In Russia, nice enamel objects were considered to be the most expensive and valuable.

ABOUT VINTAGE JEWELRY and ANTIQUE ART SUBJECTS. Like fine wine, fine jewelry also has a "vintage"-the design period or era from which it hails. Victorian or Edwardian, Art Deco or Retro, each piece in our collection has its own special pedigree. But just because one era ended and another began, it doesn't mean that creative jewelry makers simply forgot the lessons of the past!

Many of the jewels in our cases refuse to conform to a single design period, either by striking out on their own or showing the transition from one era to the next. When such daring dazzlers are over one hundred years old, they're generally grouped in the antique category. Anything younger than that, but still made before 1970, fits the vintage label. Every iconic era yields both singular and transitional pieces, like the ones we've assembled here.

Follow the link at the end of each section for more about the aesthetics and history of the period. Pictures are part of Description. This item is in the category "Collectibles\Militaria\WW I (1914-18)\Original Period Items\Russia".

The seller is "rima83" and is located in this country: US. This item can be shipped to United States.