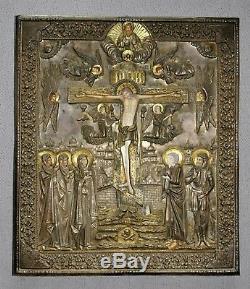 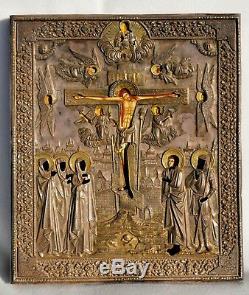 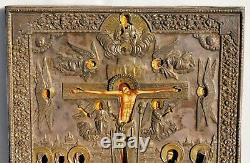 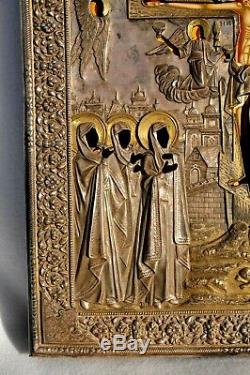 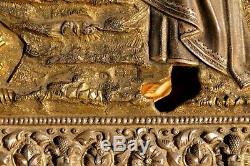 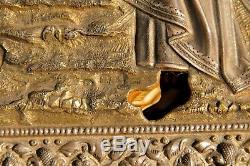 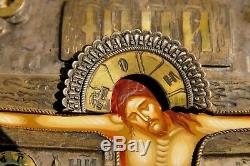 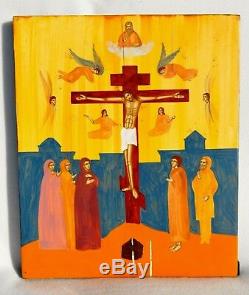 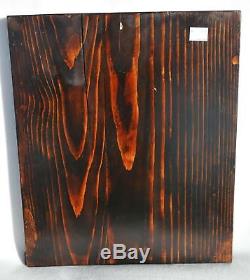 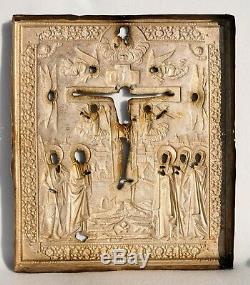 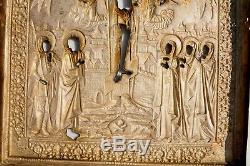 Hallmarked along the handles, good so see our many photos to get the best idea of condition. (The best indication of condition is to study the photographs carefully). A LARGE ICONS OKLAD, SHOWING THE CRUCIFIXION OF CHRIST made 19. Century by Royal Imperial Russian. Moscow, Ivan Alekseev Alekseevitch, 1892 (oklad) Silver, chased, embossed and finely engraved.

40.5 x 35 cm. We bring to your attention of Russian classy modern icon "The Crucifixion of Christ" overlaid with 19 century a chased and embossed silver-gilt oklad. Please be attentive and aware of added modern Icon on wood board under silver 19 century antique oklad. The Crucifixion of Christ ICON. The physical reality of Jesus Christs sacrifice upon the Cross is not to be ignored by those who follow Him.

Crucifixion was a method of execution by the Romans, and the Icon of Christs Crucifixion shows this event both in the earthly and heavenly realms Jesus Christ is nailed to the Cross at the hands and feet on a hill, outside of the city walls, which can be seen in the background. At the foot of the Cross stands Jesus Mother, grieving with the other women among them Mary Madeline and Mary Cleopas; to Jesus left stands the young Apostle John and one of the Roman centurions. Jesus Himself bears the spear-wound on His right side, gushing blood and water. His head is bowed, His eyes are closed; He has breathed His last. The sorrow of this scene is etched into the faces of those at the foot of the Cross.

This tragedy is also played out in the Heavenly realm: two angels in the top corners rush in to take Jesus spirit, covering their faces, unable to witness the scene. Much of the Gospel readings have been read on Holy Thursday and records the arraignment of Christ to His death and the witness of the Centurion "Truly this was the Son of God".

Icon to show Christ, Mary and only one faithful woman disciple, St. The use of the image of the Cross appears very early in Christianity both as symbol, such as the anchor, and in the simple drawing of a cross. According to Lossky and Ouspensky in their book THE MEANING OF ICONS, the image of Christ on the Cross is engraved on gems as early as the second century and the composition of the icon was seen on Church murals as early as the fourth century p. Some icons show Christ's feet on a stool or horizontal crossbar with nails through each of His feet.

Some icons show an oblique crossbar. The slanted crossbar was introduced in Russian iconography and symbolically represented the condemnation of the thief on the left side of Christ, the crossbar slanted downward, and the justification of the thief on the right of Jesus, the crossbar slanted upward. At the bottom of the Cross is an open cave with a skull: Victory over death and hell is symbolized by a cavern, which opens at the foot of the cross, below the rocky summit of Golgotha, the rock that was rent, at the moment of Christ's death, to allow a skull to appear. It is the skull of Adam who,' according to the belief of some, says St. John Chrysostom, would have been buried under Golgotha-the place of a skull (John19: 17).

If the tradition of iconography adopted this detail coming from apocryphal sources, it was because it served to bring out the dogmatic meaning of the icon of the Crucifixion: the redemption of the first Adam by the blood of Christ, the New Adam, who made Himself man to save the human race. 181 The top bar held the accusation of the crucified person. The Byzantine icon has the insignia "King of Glory" which indeed is the true title of the crucified Christ. John Chrysostom says "I call Him King, because I see Him crucified: it belongs to the King to die for His subjects" p. The earthly King was expected to give up his personal life for the good of the people.

Our King of Glory gives His life voluntarily out of love for mankind. Christ's body in the icon is twisted right, his head bowed toward His mother, His eyes closed in death. No one takes my life from me, but I lay it down of my own accord. I have power to lay it down, and I have power to take it up again (John 10: 18).

The cross is the symbol of victory by defeat. By the death of Jesus, death was defeated. We all are called to carry our cross.

In the Galatians epistle Paul tells us But far be it for me to glory except in the cross of our Lord, Jesus Christ, by which the world has been crucified to me, and I to the world (Galatians 6: 14). There are eight ends to the cross. The number eight has an outside-of-time connotation.

There are often angels seen in the icons. Some angels cover their faces to shield themselves from the sight, or cover their hands ready to serve the Lord.

Some seem to be announcing our salvation with trumpets. Sometimes the moon and the sun are placed above the cross. These symbols represent nature responding to the action of Christ and also the victory of light over darkness: It was about the sixth hour and there was a darkness over all the earth until the ninth hour. And the sun was darkened, and the veil of the temple was torn in two (Luke 23: 44-45).

Ignatius of Antioch said "He who possesses in truth the word of Jesus can hear even in silence". This silence moves us to prayer and contemplation of the event depicted.

The women show their concern for Mary in some icons and their grief in their faces. We contemplate the words of Isaiah in their faces: Surely he has borne our griefs and carried our sorrows; yet we esteemed him stricken, smitten by God, and afflicted. But he was wounded for our transgressions, he was bruised for our iniquities; upon him was the chastisement that made us whole, and with his stripes we are healed (Isaiah 53: 4-5). THERE ARE NO COMPLICATED "TERMS & CONDITIONS"...

This item is in the category "Collectibles\Religion & Spirituality\Christianity\Icons". The seller is "rima83" and is located in North Miami Beach, Florida. This item can be shipped worldwide.